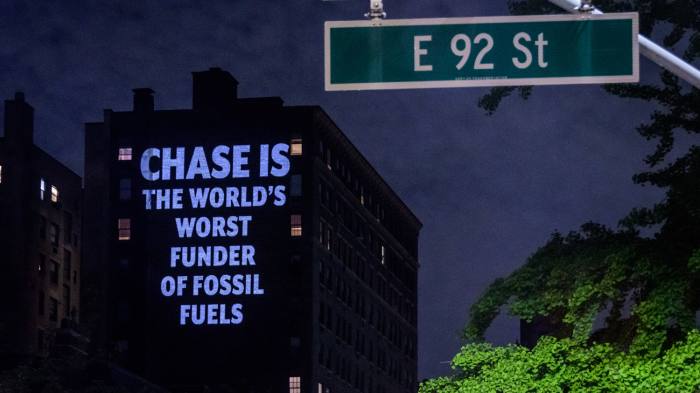 Jamie Dimon, chief executive of JPMorgan, is rarely afraid of controversy. Yesterday he reaped it (again) in spades over the bank’s climate policy at the company’s annual general meeting — and showed what a mixed record the bank is setting in this respect.

On one hand, Dimon was keen to placate green critics by reiterating the climate actions detailed in February. He also expressed hope that the coronavirus pandemic would lead to sweeping social changes by “reminding us that we live on one planet”.

But the bank also fought back furiously against a shareholder motion that sought to force it to publish a climate change risk report — and seemingly defeated this in the preliminary vote tally by a narrow margin (the full results will not come for several days).

The bank also fought off efforts to remove a controversial board member over his climate change stance — Lee Raymond, a former ExxonMobil chief executive. Shareholders voted to retain the oilman despite opposition from proxy adviser Glass Lewis.

For Dimon this might seem like a victory of sorts. Or maybe not. The controversy over the votes unleashed a storm of debate at the AGM about JPMorgan’s financing work with oil and gas companies.

And the bank’s handling of the issue about climate change reporting looks — at best — rather clumsy. The proposal for this reporting was filed by the non-profit group As You Sow, and called for JPMorgan to report how it intended to reduce the greenhouse gas emissions associated with its lending activities to align with the 2016 Paris Agreement.

Rivals Bank of America, Goldman Sachs and Morgan Stanley have already engaged with As You Sow and the non-profit withdrew similar climate change proposals at those groups. However, in March JPMorgan asked the US Securities and Exchange Commission for permission to block its resolution. The agency said no — resulting in Tuesday’s acrimonious, wafer-thin vote.

If nothing else, the saga shows that activist pressure on the banks to report on climate risk is rising: a growing number of shareholders want companies to address climate change as a risk, and report on it, in the same way any competitive threat would be measured and treated. And another test of investor pressure on climate change will come next week when ExxonMobil and Chevron announce votes on their environmental proposals.

“We are seeing higher votes this year and certainly on climate because it is an issue that is growing in importance with shareholders,” Danielle Fugere, president of As You Sow, told Moral Money.

With the coronavirus-related drop in oil prices, she said, “there is significant risk to the company (JPMorgan) and to shareholders”. (Patrick Temple-West)