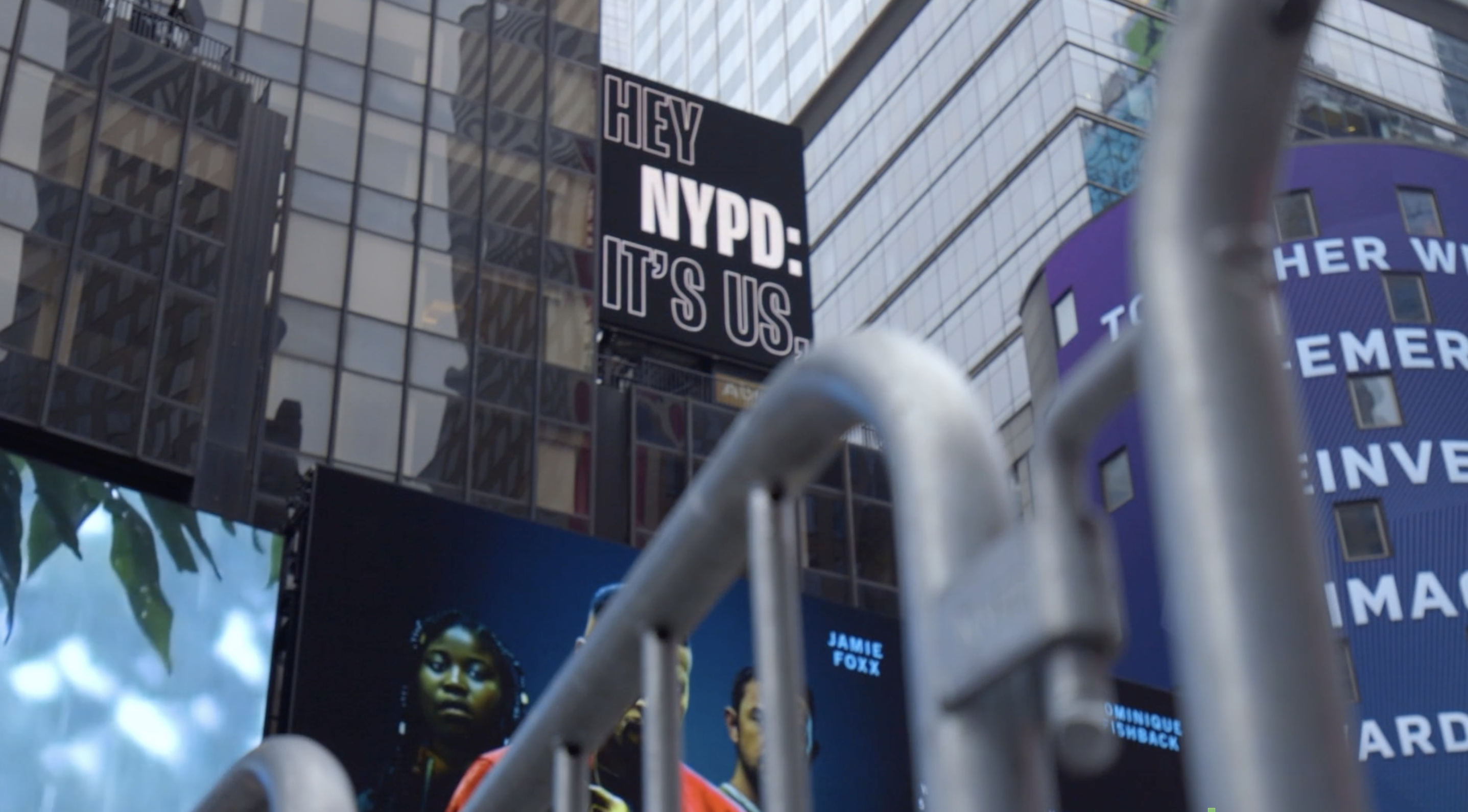 Check out the huge billboard we just put up in Times Square.

The NYPD’s police union, the Police Benevolent Association (PBA), is one of the biggest barriers to police reform in New York City and a danger to all Black people.

In a rare move to stifle our movement to hold police accountable, the PBA recently endorsed Trump for re-election. And just a few days ago, an NYPD union leader unleashed a homophobic attack on Ritchie Torres, who is likely to become the first openly gay Afro-Latino lawmaker in the U.S. House.

As folks like you, Jeanne, continue to demand justice for the Black people murdered by police, the NYPD has spent that same amount of time attempting to suppress our calls for justice. They’ve driven their cars into protestors,1 threw flash grenades into anti-police brutality protesters,2 besieged a protest leader at their home,3 and regularly beat, choke, and punch people taking it to the streets to shout, “Black Lives Matter!”

We have to put an end to the NYPD’s terror on Black people! So we just put up a huge digital billboard in the center of Times Square right across from the NYPD station to tell them we won’t stand for their attacks on us. Take a quick second to watch the video of our powerful billboard.

This is our message to the most deadly police force, Jeanne: “Hey NYPD. It’s us. NYC residents. The ones who pay your salary. We paid $300 million to settle your lawsuits. You paid nothing. We need to talk.”

The billboard, which will run until the end of September, will be an everyday reminder to the NYPD, Mayor Bill de Blasio, other elected officials, and all New Yorkers about how we currently throw away billions in tax-dollars into policing Black and Brown folks instead of interventions that actually work.

With a budget of almost 6 billion dollars a year, they outsize every other state and even some countries’ law enforcement agencies — and with an arsenal of chemical weapons, tanks, sniper units, surveillance towers, and sound grenades, they look more like an army prepared for war than a city police department.

While the NYPD’s budget has ballooned to $6 billion, affordable housing, youth programs, support for elders, education, and more have all seen cuts due to de Blasio’s misplaced priority of funding the NYPD. For every dollar the NYPD gets, only 29 cents goes to homeless services, 25 cents to the department of health, and just one penny to workforce development.

Our taxpayer money is fueling a military institution that doesn’t serve the needs of the most disadvantaged residents.

We need your help to spread our powerful message that we need to address the lack of investment in our communities. Here are a few powerful actions you can take right now:

Until justice is real,

–Scott, Malachi, Leonard, and the rest of the Color Of Change PAC team

2. ‘It Felt Like Warfare’: Protesters Say the Police Attacked Them New York Times.

ColorOfChangePAC is building a movement to elevate the voices of Black folks and our allies, and win real social and political change. Contributions to ColorOfChange PAC are not deductible as charitable contributions for federal income tax purposes.

If you’re absolutely sure you don’t want to hear from us again, click here to unsubscribe.

Paid for by ColorOfChange PAC, colorofchangepac.org, not authorized by any candidate or candidate’s committee.