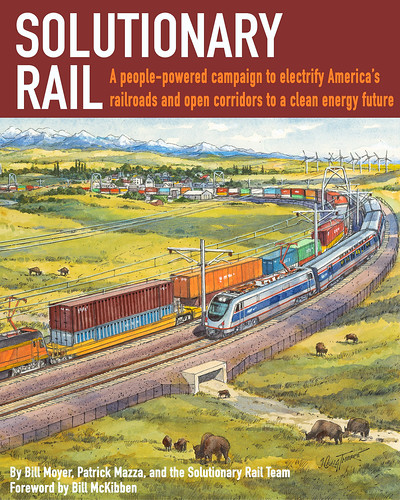 Dear SR Friends,
Please plan to join us for our first 2020 Organizing Call, Tuesday at noon (pacific)/3pm (eastern).
RSVP to get the log on info  https://www.solutionaryrail.org/calendar
Bill just returned from a week in DC, attending the Transportation Research Board meeting, and connecting with key allies.  We are excited to share with you the highlights of the gathering and plans for 2020 convenings.
Thanks!
Amy

—
To unsubscribe from this group and stop receiving emails from it, send an email to sr-team+unsubscribe@backbonecampaign.org.

JPMorgan Chase is gambling with our lives

This campaign has one simple demand: “That banks, asset managers and insurance companies stop funding, insuring and investing in climate destruction.” This is vital, as we know that banks, asset managers and insurers are all guilty of funding, insuring and investing in the climate crisis. Stopping this money pipeline from flowing to the fossil fuel industry may be one of the most important things we can do to help curtail the climate crisis.
The campaign is already witnessing incredible momentum: In the last two months, Goldman Sachs has announced it will stop funding coal mining companies and Arctic drilling projects. Liberty Mutual has promised to stop insuring coal projects. Hartford Insurance has said no more coal or tar sands. And just this week, BlackRock, the world’s largest asset manager has committed to divesting from coal, and making climate central to the way it does business.

Now, we need JPMorgan Chase, the world’s largest funder of fossil fuels, to do the same.

Can you take 3 minutes this morning to call Chase CEO, Jamie Dimon, and ask that his bank stops funding the climate crisis?  His number and a call script are here.

Since the Paris Agreement was signed in late 2015, JPMorgan Chase has loaned $196 billion to fossil fuel companies— enough money to buy 52 pipelines the size and scale of the Dakota Access Pipeline.  In 2018 alone Chase invested $64 billion into fossil fuel projects!

Even as Australia burns, JPMorgan Chase continues to pour fuel on the flames: Chase is now the planet’s largest funder of Arctic drilling, deepwater oil exploration, and the largest funder of coal and tar sands in the U.S.

Please take a few moments this morning to call JPMorgan Chase CEO, Jamie Dimon, today to demand that he stop funding climate wrecking fossil fuel companies. This is a script ready for you here.

Actions you can take THIS WEEKEND to “ACT ON CLIMATE”!

Saturday – This year’s Women+s March features speakers on Climate Justice – Speakers start at 10:30 – You can go just to the speakers or participate in the entire event.

Jan. 20 – Write and send a Letter to Chase Bank’s (#1 funder of fossil fuel extraction) CEO, Jamie Dimon, telling him to get Chase out of the Fossil Fuel Business!  Go to this link and see the letter writing toolkit.  It gives you the How and the Why and the address. https://www.ran.org/publications/chase-letter-writing-toolkit/.

ASAP – Start writing letters, emails and making phone calls to our Washington State Legislators in support of Climate legislation.  The best way to do this is to join the 350 Civil Action Team (CAT).  They will let you know what legislation is coming up and who needs to be called.

Sign up to join our Civic Action Team! You’ll receive regular updates and calls to action throughout the session.

ADVOCATE FOR WHAT YOU BELIEVE IN:

Janet Millard, has an attorney to develop and present her case for blocking a Weyerhauser Timber Sale in occupied spotted owl habitat. She needs money to pay for the attorney. She has updated her request for help, read it in the link below. Thank you.

Janet Millard – Be Their Voice – Have you ever heard about some injustice and thought: why doesn’t somebody do something about it? Especially when it comes to environmental issues? Now is your time to be that somebody…

Click here for more information about what she is doing.
Click here to support Be Their Voice organized by Janet Millard
Read the CCNCW minutes and see what we are up to! Climate Conversations NCW Meeting 1.13.20
Circle of Allies as mentioned in minutes: 350Wen-Alliescircle (1)

A short presentation on Civic Action in Washington – easy too!

Please click on the presentation link as it is very clear in just what being on the Civic Action Team can accomplish – we’d love your help!!

Hi everyone!
Thanks to all who attended the 2020 Legislative Session Civic Action Team Kick-off webinar! The session is already off to a fast start.
Here’s a link to the presentation — it includes links to the Governor’s supplemental budget proposals, the bills we discussed, and upcoming lobby days.
Know someone who wants to act on climate at the legislature? Send them to https://www.350wa.org/cat to sign up for weekly action emails!
Thanks for stepping up,
— David, Katherine and Selden for the 350 WA Civic Action Team

This is going to be great!!!